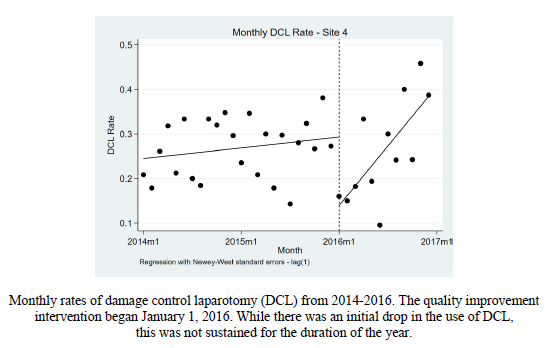 The next paper presentation I’ll review from the upcoming EAST Annual Assembly is from a consortium of six US trauma programs, and appears to be under the direction of faculty at the McGovern Medical School in Houston. They recognized that rates of damage control laparotomy (DCL) vary widely throughout the US. In part, this is due to the lack of hard and fast indications for the application of this procedure. This procedure is used in cases where patient physiology (or trends in that physiology) would suggest that persisting with an open body cavity would lead to hypothermia, coagulopathy, additional injury, or death.

This study entailed the prospective review of every DCL performed at the centers over a one year period. Each was adjudicated by a majority faculty vote as to whether it would have been safe and appropriate to perform a definitive laparotomy (DL) instead. DL means that all injuries are fixed and the abdomen is closed.

Here are the factoids:

Overall, this intervention (reviewing each and every damage control procedure immediately after) did not decrease the DCL rate as hoped. The authors cited the second look laparotomy disagreement as a possible target to improve results.

Here are some questions for the authors and presenter to consider in advance to help them prepare for audience questions:

I’ll be sitting in the front row for this one!

Note that this is a new process and we will be learning and changing it as we go!